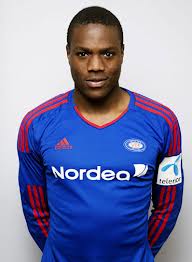 Vålerenga defeated Hamburg 3-2 on Tuesday afternoon in their last exhibition match before the start of the Norwegian championship this weekend.

The game was heading for a draw until Vif youngster Chuma Anene popped up to score the winner with 10 minutes of normal time remaining.

Anene was delighted with his goal against the Bundesliga outfit, and has admitted that he wants to improve his scoring record this season. However, he has insisted that the success of the team will come before personal glory.

''I feel very happy knowing that my qualities are good enough to leave a mark in a match against a good team  like Hamburg. But I always strive to do better.

''I don't have a specific number of goals I am targeting this year, but I know that I have the potential to do some damage in the league  if I am at the top of my game. Hopefully the team does well, that would be the most important thing,'' Anene told allnigeriasoccer.com.

The teenager has represented Norway at Under 16 - 20 level. Nevertheless, he would consider playing in a green and white jersey if he is called up by the National Team selectors.

''One of my goals is to play for the Super Eagles. By God's grace I'll reach that height, but I focus on developing my skills all the time and if I eventually get the opportunity for my fatherland, it would be a great honor.

''Fegor Ogude as well as all the Nigerians that play for Vålerenga have been a good help to me. I came as a 16 year old teenager to the club, so I have been there a little longer than Fegor, but they have helped me reach new heights in my game. And I think we all as Nigerians want to play together for the national team one day. We all push each other to our limits, which is great,'' said Anene.

Chuma Anene is a very pacy forward. And his style of play has been likened to former Arsenal star Thierry Henry.

''I've always looked at Henry as one of the best players of all time, and my finishing is probably the main thing I've looked at some of his videos to develop. But other than that, I like to play the way my mind and heart allows me to play.

''I also have a good physique and I am fast as well. Some of my strong qualities would be my finishing technique,'' he concluded.