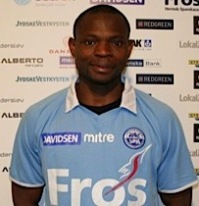 Only two days ago, the 32 - year - old stopper was unveiled by the South Jutland club. Now, after more than nine months of inactivity, the ex Monaco man is looking forward to playing football again.

Bold.dk with reference to the official website of Sonderjyske quoted manager Lars Søndergaard as saying: ''It is really great to be playing again. You can really feel the players welcome and looks forward to this game.''

Meanwhile, Afolabi's compatriot, Adigun Salami for tactical reasons has not been named in Sonderjyske's 19 - man squad.

Sonderjyske occupy the tenth position on the table, level on points with Silkeborg, who have played a game more.