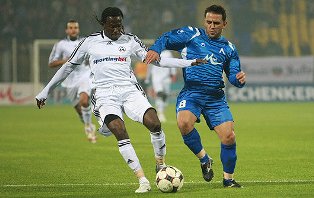 Victor Deniran's loan spell at PFC Montana has been cut short by injury after undergoing knee ligament operation at a Sofia hospital this past week, the Olympic National Team invitee has exclusively revealed to allnigeriasoccer.com.

The 22 - year - old suffered a relapse of the knee injury which had kept him out of action since November.

''I had an operation last week, which will keep me out of action for a minimum of three months.

''So I am definitely out of action for the rest of the season. I'll remain here at Montana until the end of the season,'' Deniran, who is primarily a player of Slavia Sofia, disclosed to allnigeriasoccer.com.

This unfortunate injury means Deniran will not be able to help PFC Montana in their battle to escape the drop.

Rooted to the bottom of the table, the northwestern Bulgarian club have not managed a win in their last 10 matches in the top flight.

''Yes, I believe there is still hope for survival. Today, (Sunday, ed) we played against Levski Sofia, one of the form teams in the league and we held them to a draw. The result has given the team hope and a lot of confidence to prosecute the remaining matches.

''I am disappointed I can't help Montana again this season. But God has a reason for everything.I know mine is for a good cause,'' he said.

Victor Deniran, who has spent five years in Bulgaria, is contractually bound to Slavia Sofia until June, 2014.