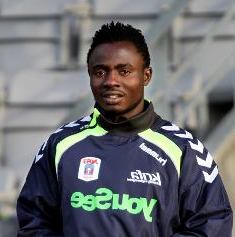 Anicet Yala, coach of the Gabonese Under 20 Team, has rued the absence of captain Franck Engonga for their second match at the African Youth Championship against the Flying Eagles on Wednesday.

The Boca Juniors, Argentina midfielder was shown a red card in the Panthers first match against Democratic Republic of Congo.

''The absence of captain Franck Engonga will inevitably be a disadvantage for us, especially since he is a power holder who knows the group and to boost the fighting spirit when it is needed,'' says Anicet Yala, agpgabon.ga reported.

The Flying Eagles lost their opening match by the odd goal to Mali, meaning any result short of a victory against the Panthers could prove disastrous in their quest to qualify for the Under 20 World Cup.

The top two teams in each group will represent Africa at the Under 20 World Cup in Turkey later this summer.