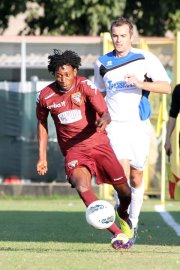 Italian - Nigerian striker Osariemen Ebagua has agreed in principle to extend his contract with Varese by an additional three years, Tuttomercatoweb.com with reference to Sky Sports Italia is reporting.

Ebagua's current contract with The Leopards was due to expire at the end of the 2013 - 2014 season, meaning he would remain in Lombardy until 2017 if he extends his stay.

All things being equal, the 26 - year - old will put pen to paper on the new deal in the coming days.

Ebagua has been one of the outstanding players for Varese in the Serie B and has netted 13 goals in 24 games.

Consequently, the leadership of Varese has decided to reward him with a new contract.