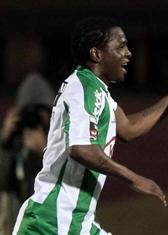 Nigeria international Peter Suswam could play his first match in the Primeira Liga this weekend when Vitória Setúbal entertain Marítimo in the 24th round of games.

Since the season started back in August, Suswam has not played a single game in the Portuguese championship.

In fact, he was declared surplus to requirement by Vitória Setúbal, who had intentions of terminating his contract amicably or sending him on loan. But none of the options materialized.

Last weekend, Suswam played for 90 minutes in a practice game against  Portuguese Third Division side G.D Fabril. Manager of Vitória Setúbal, Jose Mota used the test game to fine-tune his strategies ahead of the meeting with Marítimo.

From all indications, Peter Suswam will replace Pedro Miguel, who is suspended for the tie due to accumulated yellow cards, for the visit of Marítimo.

Suswam's last official appearance for Os Sadinos was against Benfica more than 10 months ago. He is tied to Vitória Setúbal until June 2013 .