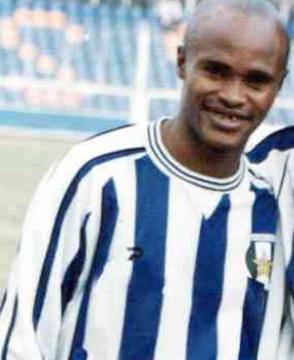 It can be authoritatively revealed that a member of Saudi 1989 'Daman Miracle' squad, Oladimeji Lawal has concluded all arrangements to get married to his heartthrob, Abimbola Ayoade.

The low key marital event according to Lawal’s family source will hold in Ibadan on April 6, 2013.

Though the former Super Eagles’ right winger is said to be keeping the arrangements close to his chest, but we can reveal that most of his colleagues in the footballing world will grace the event.

A close associate of the ex-international popularly known as Kabongo disclosed to newsmen in Ibadan that “Kabongo decided deliberately not to print official invitation cards. This is to reduce the number of people that will attend”.

He added that the former Shooting Stars player who already has two kids from his former London based wife does not want to make the wedding an elaborate one.

The couple will visit the registry after which a modest reception will hold at KS Motel Hall, Total Garden, Ibadan.

It would be recalled that Lawal after his retirement from active soccer close to a decade ago has acquired a FIFA player’s license and has been helping unattached or club-less footballers through his All Stars Football Club located inside Obafemi Awolowo Stadium Ibadan.