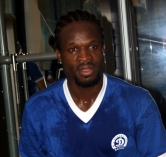 Nigerian midfielder Christian Obodo will miss Dinamo Minsk's games in the championship against FC Minsk and Dnepr Mogilev after the medical team ruled him out of action for two weeks.

He failed to make his league debut on Sunday in the 1 - 1 draw with BATE due to a strain, the official website of Dinamo Minsk reported.

Though the injury is not very serious, it is quite painful which has prevented him from participating in full training.

If Obodo's  rehabilitation goes according to plan, he would return to action in the next 14 days.

After spending more than a decade in Italy, the central midfielder signed a one -and - a - half - year contract with Dinamo Minsk in the winter transfer market.