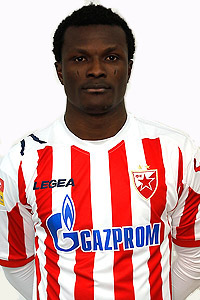 Red Star Belgrade winter signing Abiola Dauda could not hide his joy after scoring a brace against Hajduk Kula on Wednesday in the 21st round of matches in the Super Liga.

Abiola Dauda netted in the 13th and 49th minute to give Red Star Belgrade a two - goal cushion.

Darko Lazovic wrapped up a comfortable 3 - 0 victory for the 1991 European champions with a strike 11 minutes into the second half after receiving an assist from the 25 - year - old Nigerian forward.

''My first goal was very important. When I scored the second time the game was already decided. Saw that I had a lot of space, was faster than the defenders and we were lucky enough to attack in an attractive way,'' says Dauda to Mozzartsport.com.

Dauda spent four years in Sweden playing for Kalmar. He has praised the fans of Red Star for their support throughout today's game.

''I have the right words to describe the fans. Amazing to see how they sing from the first to the last minute. Was a pleasure to play in such an atmosphere,'' Dauda said with a smile.