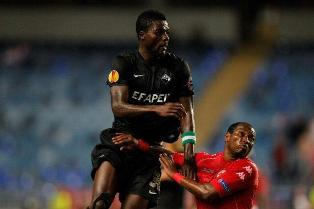 Super Eagles invitee John Ogu did not participate in training on Tuesday afternoon as Académica returned to their training complex after Sunday's 1 - 2 loss to Gil Vicente.

It is correct John Ogu is nursing a knee injury though he has claimed that he will return to action next Friday when Académica travel to face Uwa Echiejile's Sporting Braga.

Pedro Emanuel, the manager that signed Ogu last summer, was fired by president José Eduardo Simões after the loss to Gil Vicente.

He has been replaced by retired Portugal international Sérgio Conceição.

Académica sit 13th in the Primeira Liga standings, but they have the same number of points as Moreirense, who occupy the second relegation place.