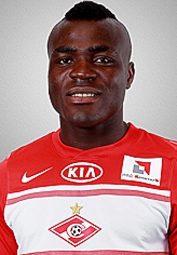 Spartak Moscow forward Emmanuel Emenike claims to have fully recovered from a hamstring injury which had sidelined him from action since February's African Cup of Nations, BBC journalist Oluwashina Okeleji said on his Twitter page.

The 25 - year - old Nigeria international started individual training with the red and white since early April.

It remains to be seen if Emmanuel Emenike is selected by manager Valeriy Karpin for the home match against Amkar Perm' on Sunday.

The news of Emenike's return to fitness will be welcomed by Super Eagles coach Stephen Keshi, who has named the Afcon top scorer in his preliminary squad  for the Fifa's Confederations Cup holding in Brazil from June 15 - 30.

He has netted 5 goals in 15 appearances in the Russian Premier League.