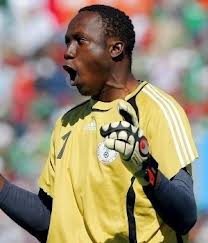 Bnei Yehuda custodian Dele Aiyenugba has expressed his disappointment in the wake of his side's 2 - 2 draw with table - toppers Maccabi Tel Aviv on Saturday.

''It was a very difficult game. Maccabi Tel Aviv is probably the best team in Israel today. We respected them very much. Had opportunities to win, it's football, and this is a good result for us.

''We are in pursuit of Kiryat Shmona and it was a very hard game for us. Tie reflected, but when you get a 2- 2 in such a situation,it is a bit disappointing,'' Aiyenugba, who has spent six seasons with The Lions, was quoted as saying by Sports Walla.

After failing to win, Bnei Yehuda's hopes of playing in Europe next season hang by a thread. But Aiyenugba is refusing to throw in the towel.

He told the Israeli website: ''Everything lies in faith. If we believe that we have it, we will continue to work hard and do our best to achieve the goal also for our fans, who will be happy if we get to Europe.''

Dele Aiyenugba has played 31 matches in the Israeli championship in the current campaign.