...the complete Nigerian football portal
Subscribe
Michael Olagbemiro : I Am Sure We Will Survive The Drop
Published: April 14, 2013 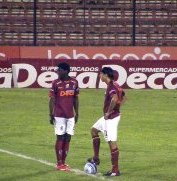 Defensive midfielder Michael Olagbemiro is confident Bahrain Premier League side Al Makiya can survive the drop at the end of the season.

Makiya currently occupy the 8th position on the 10 - team table, with 11 points from 12 matches. It was as a result of their poor form in the league that made the leadership of the club sack the former manager three weeks ago.

''We have moved up a bit to third from bottom, and it is two teams to be relegated. If we can win two of next six games, then I am sure we will be safe.

''Most of the players did not really like the former coach, complained of his pattern of play. Now we have a new coach from Tunisia. And since he came, things have been different,'' Olagbemiro told allnigeriasoccer.com.

Rejuvenated Al Makiya will attempt to qualify for the final of the Kings Cup at the expense of Al Riffa on Sunday.