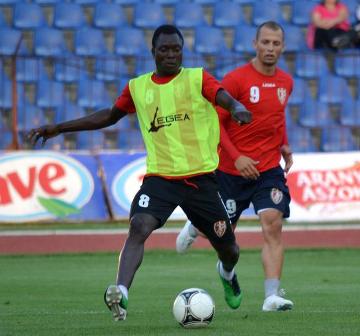 Having lost in the finals of the Albanian Cup on two occasions, the former Nigeria youth - teamer has set his sights on qualifying for May's final against Laçi or Kukësi .

Orelesi, who has started 21 of the Super Liga club's 22 games this season, told panorama-sport.com: '' Of course we want to win cup, as it is our goal at the beginning of the year. I think we have 50% chance to raise the trophy.

''It became the third time that I get close to the trophy, I lost twice in the finals, this time will be mine. I am convinced that is going to come.''

He added: ''We will try to play our game. Byllis took points from us in this league, but now we will show our real strength and I am sure that in the end we will move on to the finals.''

Skënderbeu Korçë would be crowned Albanian league champions for the third successive year if they defeat Flamurtari Vlorë on Friday.