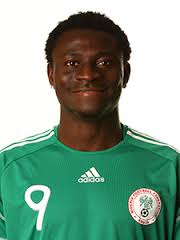 The Nigeria international, who lasted just over an hour on the pitch, was on target after 27 minutes, profiting from a rebound after goalkeeper Clint Irwin spilled a shot from Shalrie Joseph.

Of course, Martins celebrated his debut goal for Sounders in his customary style by executing a cartwheel-backflip.

''He was a real trooper. At first, we didn't expect him to start this game, but then with the situation with Eddie Johnson when he went down on Friday, we said, 'Hey, you think you've got 45 minutes in you?' He said 'yeah,' so I said I was going to start him.

''He gave everything he had for as long as he could, and obviously scored a great goal,'' manager Sigi Schmid was quoted as saying by mlssoccer.com.

So far, Obafemi Martins has made three appearances in the MLS for Seattle Sounders, who are last in the Western Conference.