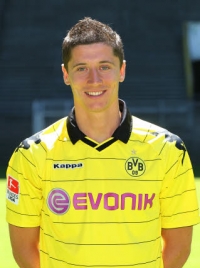 24 hours after Bayern Munich's 4 - 0 win over Barcelona, Borussia Dortmund gave Real Madrid a footballing lecture as they defeated the Spanish powerhouse 4 - 1 in the first leg semi - final of the Champions League played on Wednesday.

Jurgen Klopp's side opened the floodgates as early as the 8th minute through Polish striker Robert Lewandowski, who reacted quickest to Gotze's intelligent cross.

Just before the break, Cristiano Ronaldo restored parity for Real Madrid after receiving a pass from Gonzalo Higuain.

It took Robert Lewandowski five minutes after the restart to score his second of the game . He completed his hat -trick in the 55th minute then scored a fourth goal from the penalty spot midway into the second half.

Certainly, Real Madrid's 4 - 1 defeat has jeopardized their chances of qualifying for the final of the competition.

The second leg comes up in Madrid next Tuesday, April 30.