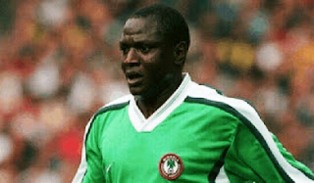 Former Super Eagles Coach and teammate of the late Rashidi Yekini, Samson Siasia expressed his disappointment at the low turnout at the book launch and lecture to commence the first year anniversary of the demise of late goal king held in Ibadan yesterday as many expected guests were absent from the event.

Speaking with newsmen after the event, Siasia who was the only teammate of Yekini present at the occasion was furious that the late striker who scored Nigeria’s first World Cup goal deserved more than what he met in Ibadan.

''I’m not pleased with the turnout here, I drove down here from Bayelsa State with the love, huge regard I have for late Yekini and high expectation of a befitting anniversary for him but you can all see as this hall is being scanty.

''Maybe people would turnout for a memorial football match slated for him on Friday, but it’s a shameful thing that a person of Yekini’s caliber canbe celebrated in this nonchalant manner,'' Siasia fumed.

Speaking further, Siasia said what he missed most about Yekini was his jokes while they were together in Super Eagles camp.

Contrary to some insinuations that Yekini was an introvert, Siasia said the late Shooting Stars striker was a jovial person.

The Oyo State Commissioner for Youths and Sports Dapo Lam-Adesina was conspicuously absent at the event while his Ogun State counterpart, Gbenga Otenuga sent his permanent secretary, Wole Odejobi to represent him at the event.

Dr. Felix Owolabi and the Editor of Soccer Star, Kunle Solaja who delivered lectures at the event and the first vice President of Nigeria Football Federation, Mike Umeh spoke glowingly about the deceased while urging the active footballers to be conscious of their life after football.

The author of the book titled Rashidi Yekini: The Life and times of Nigeria’s Goal King, Jubril Mohammed Olanrewaju who doubles as counsel to the deceased, expressed his appreciation to Nigeria Bar Association (NBA) Ibadan chapter that ws represented at the event by Barr. Dele Adegoke, High court Justice in Ibadan, Abass Moshood and a Magistrate, Olaide Hamzat for gracing the occasion.