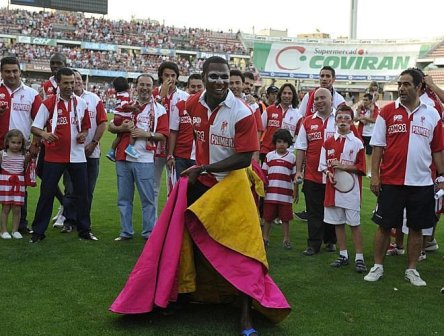 Former Flying Eagles skipper Odion Ighalo netted his fifth goal in La Liga against Malaga on Saturday in the 34th round of matches.

With this victory, the Rojiblancos horizontales are now 3 points above relegation candidates Deportivo La Coruna, who occupy the 18th position.

Manager Lucas Alcaraz had to withdraw Ighalo from the Andalusian derby just after the hour mark after he suffered an injury.

Speaking exclusively to allnigeriasoccer.com, Odion Ighalo said: ''That was my fifth goal in the league. I was substituted because I felt some pains in my groin and couldn't run.

''I am going for a check up tomorrow (Tuesday, ed) to know if I can play this weekend.

''There are four games to go and I am positive we will survive the drop.''

Granada, who have managed only one win in their last five away matches, play Real Sociedad next Monday.