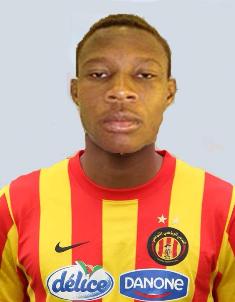 Esperance starlet Emeka Emerum wants an opportunity to play for the Flying Eagles at the Fifa Under 20 World Cup billed to be staged in Turkey this summer.

The 18 - year - old striker is thought to have impressed coach John Obuh when the Blood and Gold met the Under 20 National Team in a friendly prior to the African Youth Championship.

After the exhibition match played in Tunisia, John Obuh gave the youngster his word that he will invite him to camp to fight for a shirt. But there has been no contact between the two since April.

''I spoke to the coach for the last time before he traveled to Germany to attend a coaching course.

''He assured me that I am in his plans, and will invite me for the camping exercise.

''Up till now, I am still waiting to hear from him. The coach has seen me play the last time the team was in Tunis.

''We discussed after the friendly between the Flying Eagles and Esperance. I would love to play for the national team,'' Emerum told allnigeriasoccer.com.

The ex Bayern Munich youth  - teamer has seen his first team opportunities limited at Esperance due to the strict foreign quota rule.

''So it is very difficult for me to play as they are more experienced than me. I am still working hard to get my chance,'' said Emerum, who has been compared to ex Monaco star Victor Ikpeba.

Emeka Emerum has scored 4 goals in 5 appearances for the reserve team of Esperance.