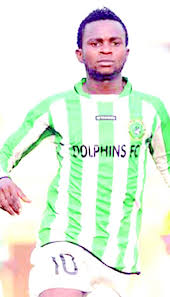 As reported by Portugal's most influential sports daily A Bola, Flying Eagles midfielder Chidi Osuchkwu is one of the targets of José Peseiro, manager of Sporting Braga in the summer transfer market.

19 - year - old Osuchukwu, who is currently on the payroll of local side Dolphins of Port Harcourt, is widely regarded as one of the top talents in the land and has been one of the pillars in the Under 20 National Team for the past two years.

Allnigeriasoccer.com understands that the deal that will see Osuchukwu join Sporting Braga after the Fifa Under 20s was brokered by influential agent Emeka Ezeala.

Sporting Braga, who will play in next season's Europa League, are expected to pay Dolphins the sum of $500,000 as the player's transfer fee.

Chidi Osuchukwu has been named by coach John Obuh in Nigeria's 30 - man provisional squad for next month's Fifa Under 20 World Cup holding in Turkey.