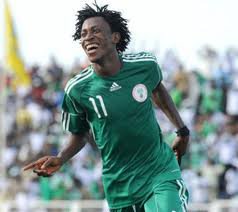 Multilingual AC Milan striker Nnamdi Oduamadi, who spoke to reporters in English and Italian, netted his first hat - trick in Nigeria colors against Tahiti on Monday.

The 22 - year - old has confessed that he idolizes Brazilian superstar Ronaldinho, who defended the colors of AC Milan from 2008 - 2010.

Ronaldinho now plies his trade with Clube Atlético Mineiro, who are based in  Belo Horizonte, same city that hosted the tie between Nigeria and Tahiti.

''Ronaldo has always been my inspiration. I was happy just to watch him train. One day I spoke to him, and he was very attentive to me. I hope someday to get to his level,'' Oduamadi said to globoesporte.com.

It won't be a walk in the park when Nigeria trade tackles with their next two opponents in Group B - Uruguay and Spain.

Mathematically, three points against Uruguay will see the African champions progress to the semi - finals of the Confederations Cup.

''Spain has a fantastic team. We will fight, but we know it is difficult. We hope to beat Uruguay ,'' Oduamadi told the Brazilian media giants.

Nnamdi Oduamadi, with three strikes, tops the goalscoring chart after the first round of matches in the Confederations Cup.