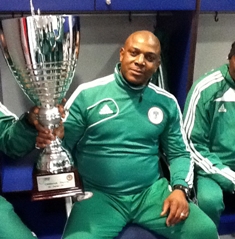 Speaking at a press conference after Nigeria's 2 - 1 loss to Uruguay on Thursday evening, manager Stephen Keshi remained coy when quizzed about the absence of African coaches in the European Leagues.

''How many African players playing in Europe, have a good performance, they can even have a certified technician, but there may be technical?

''They tell us to go back to Africa. The reason? I do not know anything about prejudice. I have lived in the United States, but refused to accept the experience I gained in Europe as a player in helping Europe. Do not want to talk about it,'' Keshi was quoted as saying by globoesporte.globo.com.

Nigeria will lock horns with Spain in the last group game, knowing they have to win by a wide margin to stand any chance of qualifying for the knock out rounds of the Confederations Cup.

Despite the defeat to Uruguay, Stephen Keshi says the performance of his charges ticks so many boxes.

''I was impressed with what my boys did against Uruguay, a team playing together for six years. I was pleased.

''Playing against the world's best team (the Fury) is something we all hope for at this point.

''It's wonderful to play in Brazil and I hope that this experience will serve for the next World Cup.

''We are building our future and we must work together. It is a collective effort,'' adds the former New Nigerian bank libero.