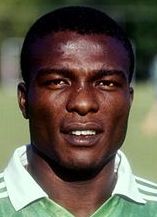 Oliha, who lost his life at the age of 44, defended the colors of Nigeria at the USA 1994 World Cup and was part of the squad which won the African Cup of Nations in the same year.

''Nothing was wrong with my brother yesterday (Saturday). He even led his team to a football game yesterday and he was alright and lively.

''But like 4.00am this morning (Sunday) he complained of slight headache and he was rushed to the hospital from where he died,'' a family source told goal.com.

Before the midfielder retired at the age of 27 due to a knee complaint, he played for Antalyaspor (Turkey) and Maccabi Ironi Ashdod FC (Israel)