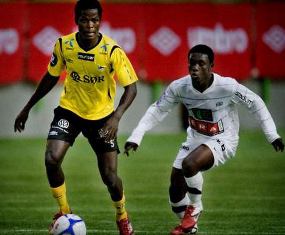 The Thursday training of the home based Eagles in preparation for their CHAN qualifier against the Ivory Coast was held at the Ahmadu Bello Stadium, with the emphasis more on techniques and tactics.

The team who had their first feel of the lush green Ahmadu Bello Stadium,venue of the game trained for two hours under the watchful eyes of their coaches led by Stephen Keshi.

Also watching were sparse spectators who came to catch a glimpse of the team stars ahead of Saturday's encounter.

Meanwhile, allnigeriasoccer.com has gathered that ex IK Start, Norway midfielder Olufemi Oladapo is in danger of missing out on the tie after he was replaced in the 3 - 0 win over a Kaduna selection yesterday.

Oladapo also sat out today's training entirely as he was pre-occupied with jogging on his own and improving on his fitness.

It is being speculated that Olufemi Oladapo is carrying a groin complaint.