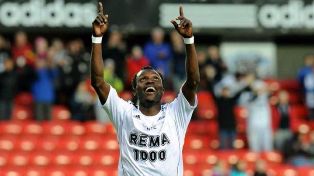 With 6 goals in his last 7 matches, Rosenborg attacking midfielder John Chibuike is a player firing on all cylinders.

The 24 - year - old is not allowing transfer speculations linking him with an exit from Norway this summer affect his performance.

'' It was a very good game, we really needed the three points.

'' It was a fantastic game for me too and I am happy that I topped up my good performance with a goal.

'' I thank God who made it possible for me and my team,'' Chibuike said to allnigeriasoccer.com.

John Chibuike attributed their failure in Europe to ill luck, stressing that RBK were in control of both matches.

'' We played very good in Scotland but we were unlucky.

'' We will now focus on the Tippeligaen and the Norwegian Cup,'' he said.

Rosenborg, a force in Scandinavia, top the Premier League with 37 points from 17 matches, 2 points ahead of nearest challengers Strømsgodset.