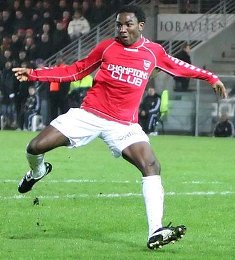 AFC United frontman Chidi Omeje has predicted that Saturday’s tie against Utsikten, who are fighting for survival, will not be as easy as ABC.

In his debut season in the Superettan, the former Dalkurd star has caught the eyes of many, scoring 9 goals in the league, including his 89th minute strike yesterday against Sirius.

“I think it’s going to be a tough game! They are a very strong side at home and they are fighting not to be relegated,” said Chidi Omeje to allnigeriasoccer.com.

“I think it will very tough game , we also need the three points so we are going all in to get it.”

Chidi Omeje appended his signature to a one - year deal with AFC United before the start of the 2015 season.