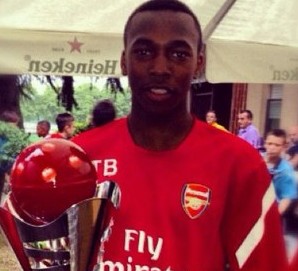 English Premier League club Arsenal have sent their updated Champions League roster to UEFA, ahead of their round of 16 clash against Barcelona later this month.

Both defenders and Super Eagles striker Alex Iwobi were registered as B list of players, a list for players born on or after 1 January 1994 and have played for the club for any uninterrupted period of two years since his 15th birthday.

Tolaji Bola will sport the number 62 jersey while Eyoma will play with the number 67 kit .

England youth international Chuba Akpom is on loan at Hull City until June 30 and was left out of the squad list sent to UEFA.