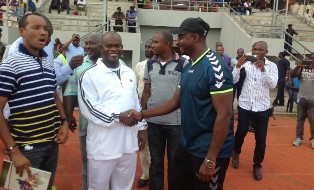 If the news coming from Kogi United camp is anything to go by, the feeder team of the club will participate at the 2017 Dana Youth Cup taking place in Copenhagen, Denmark.

Chairman of the club, Mallam Abdul Sule who disclosed on Monday this via a telephone conversation from Denmark noted that the arrangements was in the final phase for the upcoming footballers- who were put together last year- to represent Kogi State and Nigeria at the annual soccer fiesta which has helped in grooming young players to stardom.

Sule said he was also in the Scandinavia country to strike out the deal with Akademisk Boldklub, AB Gladsaxe and a representative of clubs in Germany in partnering with the Confluence State club to expose players to foreign football and develop the game in the state.

Sule, who starred for AB and hosts of top clubs in the Scandinavian region, maintained that Danish based sportswear manufacturing company, Hummel has also produced newly designed kits for both Kogi United and Confluence Queens with new jerseys for the upcoming season adding that collaboration with top Danish women football clubs for the Confluence Queens players.

Kogi United will be campaigning in the Nigeria National League, NNL next season while Confluence Queens will compete for league title in the apex women football league in the country, the Nigeria Women Premier League, NWPL.