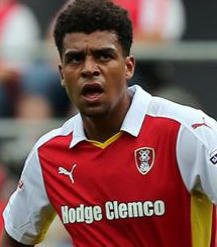 Nigerian midfielder Tom Adeyemi has missed out on Rotherham United's Goal of the Season award.

The Norwich-born player's brilliant goal against Huddersfield Town on Valentine's Day had been in the running for the accolade, along with strikes from Danny Ward, Joe Newell and Will Vaulks.

Adeyemi scored a stunning goal from 25 yards out to give the Millers a one-goal advantage in the 71st minute.

At an awards ceremony on Saturday, the Goal of the Season went to Will Vaulks for his goal against Wolverhampton Wanderers.

After 44 rounds in the Championship, Adeyemi has netted six times, including his winner against Ipswich Town on Saturday,  and only top scorer Danny Ward has more goals for Rotherham United in the league.