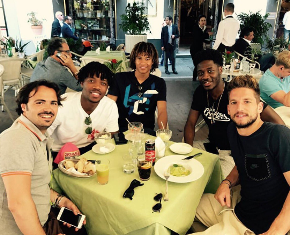 Super Eagles invitee Ola Aina is back in London after his trip to Naples, Italy earlier in the week.

The former England U19 skipper had accompanied his good pal and teammate Nathaniel Chalobah, who spent time on loan at Napoli last season, to visit Napoli striker Dries Mertens.

Nathan Ake, who received his first senior call-up to the Netherlands squad on Thursday joined the duo on the trip, and the Belgium international has uploaded a picture of the quartet having lunch on Twitter.

Ola Aina is hoping to make his first-ever Premier League start when the champions host Sunderland in their final game of the season on Sunday, having come off the bench against the Hornets.