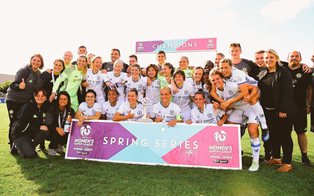 Eniola Aluko was in celebration mood after Chelsea Ladies won the inaugural FA Women's Super League Spring Series title following a 2-0 road win over Birmingham City on the final day of the season on Saturday.

It was the fourth league title won by the Stamford Bridge outfit this season, with the Men's team, U18s and Women's Youth crowned champions in their divisions.

Aluko did not make Chelsea's match day squad in the battle of The Blues due to an ankle injury but helped the team register wins over Sunderland and Reading earlier in the season.

The England international posted on Twitter : ''Great to have that trophy winning feeling back. Can't beat it. Spring series Champions 🏆💙 @ChelseaLFC''.

The 30-year-old had stops at Birmingham City, Charlton Athletic, St Louis Athletica, Atlanta Beat and Sky Blue FC before returning for a second spell with Chelsea Ladies in 2012.

Born in Lagos, Eniola Aluko has appeared for England over 100 times since her debut against the Netherlands thirteen years ago.