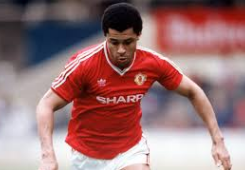 Manchester United have announced their squad for a charity game against Barcelona Legends on Friday, June 30, with no player of Nigerian descent included in the 17-man roster.

Former Republic of Ireland central defender Paul McGrath is one of the most famous players of Nigerian descent to have represented Manchester United in the past, but has not been selected by manager Andy Ritchie.

Clayton Blackmore, Wes Brown, Ronny Johnsen and Mikael Silvestre are the defenders included in the team.

Barcelona earlier confirmed that ex-Super Eagles stars Emmanuel Amuneke and Gbenga Okunowo will not be on parade at the Camp Nou tomorrow.

Tickets for the charity  game cost between €10 and €19 and the donation will be used entirely to fund the construction of the new care and research centre at Pediatric Cancer Center Barcelona.