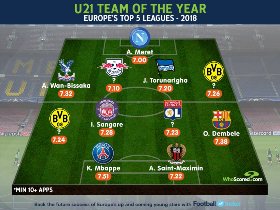 Nigeria Football Federation target Jordan Torunarigha has been chosen in the U21 Team of the Year Europe's Top Five Leagues by influential football statistics website Whoscored.
Reviewing the most outstanding youngsters playing in the Premier League, Bundesliga, La Liga, Ligue 1 and Serie A, the Hertha Berlin starlet is among the top two performing central defenders over the course of 2018.
Kylian Mbappe of Paris Saint-Germain made the list as well as Barcelona's Ousmane Dembele and Borussia Dortmund's rising star Jadon Sancho.
The 21-year-old Torunarigha was awarded the ninth highest rating, 7.20, of the eleven U21 stars named in the ceremonial eleven.
Josh Wright wrote on Torunarigha : ''After flirting with Hertha Berlin’s first-team during the 2016/17 campaign, Jordan Torunarigha has been forced to wait until 2018 to really make his mark in the Bundesliga.
''The 20-year-old made 16 Bundesliga appearances this year and is now firmly knocking on the door for a regular starting berth behind Niklas Stark and Fabian Lustenberger.
''Torunarigha is Hertha’s third-joint top scorer in the Bundesliga this season with two goals.
''Furthermore, of players aged 21 or under in Europe’s top five leagues that made at least 10 appearances in 2018, only four averaged more clearances per game than Torunarigha (4.7).''
Toruanrigha committed his future to Hertha BSC after penning a new long-term contract on December 21, 2018.
Igho Kingsley