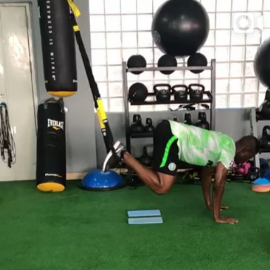 The holiday is over and Super Eagles left back Elderson Echiejile has returned to the training ground at an undisclosed facility in order to keep up his fitness.

The former As Monaco defender shared with his followers clips of him training alongside some footballer friends which include Super Eagles striker Odion Ighalo and Osas Okoro on social media.

The 30-year-old has had Spells at Standard Liege, Sporting Gijon, Braga, Sivasspor and Cercle Brugge.

After spending the second half of last season on loan at Brugge, he ended his contract with Monaco by mutual consent in August and he is set to join a new club before the end of the January transfer window according to a source close to the former Braga man.

Brila.net has gathered that there are proposed deals for Elderson in Asia, particularly From the Chinese Super League and while his representatives are working on it, he is back in the gym to keep fit.

Echiejile was one of the senior members of the Super Eagles squad led by Coach Gernot Rohr to the 2018 FIFA WORLD CUP in Russia.