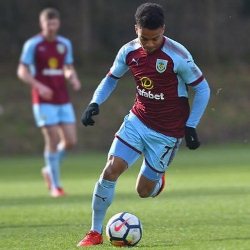 Through a publication on their official website, Premier League side Burnley have confirmed their retained and released list following the conclusion of the 2018-2019 season.
Promising Nigeria-eligible winger Tunde Bayode has been informed that he has been offered a new contract.
The 20-year-old was one of the first names on the Clarets teamsheet in the recently concluded season, making 34 appearances combined in the Professional Development League and Premier League Cup, scoring four goals.
He was a third-year scholar at Burnley before inking his first professional contract at the end of the 2017-2018 campaign.
Burnley have also informed that talented left-back Ali Koiki is remaining at the club, having activated a contract clause to extend his stay beyond this season.
The 19-year-old was loaned out to Swindon Town for the second half of the season and made the 18 for Premier League matches against Arsenal and West Ham in December prior to his loan move to the Robins.
Igho Kingsley
Photo Credit : burnleyfootballclub.com