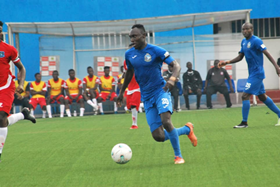 Joseph Osadiaye has opted against renewing his contract with Nigeria Professional Football League Champions Enyimba after his current  contract expired last month.
The former Warri Wolves and Akwa United forward spent the last four years with the People's Elephants and was part of the team that won the NPFL last season.

The Benin City born nimble footed attacker is already attracting interest from other top clubs in the league.

Reaffirming the news, the player's intermediary Mr. Eddie Iseri Ogbemudia said : "It has been an eventful four years with Enyimba, I must commend Joseph's professionalism all through his stay with Enyimba I never got any bad report about him.

''Joseph is going to miss Aba, he loves the club, remember he scored some crucial goals and assists during the NPFL playoff that made Enyimba Champions for the 8th time".

Mr Eddie also confirmed that there are suitors from China, Serbia, Malta, Egypt and locally.