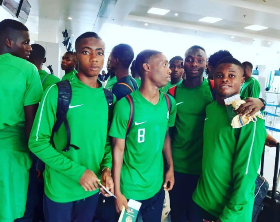 The Nigeria Football Federation have officially announced a 25-player provisional roster for the upcoming FIFA U17 World Cup to be staged in Brazil.
As exclusively reported by allnigeriasoccer.com on Wednesday, former Chelsea starlet Daniel Jinadu, Bournemouth goalkeeper Joseph Oluwabusola and Arsenal's Hale End Academy product Malcolm Ebiowei have been included in the squad list as well as Sidos Academy wonderkid Akinkunmi Amoo.
Coach Manu Garba have decided to give Jinadu, Oluwabusola and Ebiowei a chance in the team after impressing in the training camp held in Abuja.
With only three goalkeepers named on the provisional roster, it is a certainty that the Bournemouth and West Ham starlets will make the final 21-player squad to be unveiled next week, barring an injury during the the preparatory period in Sao Paulo.
Apart from goalkeepers, the squad contains eight defenders, ten midfielders and four strikers.
Nigeria's 25-Man Provisional Roster FIFA U17 World Cup