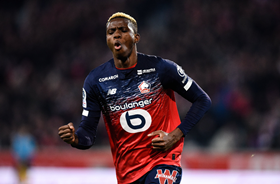 Victor Osimhen's solitary strike made the difference for Lille in their 1-0 league win over Brest at the Stade Pierre-Mauroy on Friday evening.
The Nigeria international profited from an incisive drive from teammate Jonathan Ikone who teed him up for a bottom left corner finish in the 16th minute.
The goal was his ninth in the topflight and his eleventh strike in all competitions for Les Dogues this season.

Fans on twitter could not help but laud the consistency the 20-year-old has been putting in for his team this season so far, and we have gathered the best of the tweets thus,

@harkeanee: Victor Osimhen is on fire this season

@olamidejnr: Victor Osimhen is on fire this season

@jeremy_liit: Brest have one of the meanest defences in Ligue un this season, well drilled and very organized. Not a problem for Osimhen tho. 1-0

@waxxa_restored: This Osimhen is a serious baller. Would love to see him in the PL.

@junkieYno: another day, another Osimhen goal

@gambotech: Osimhen is in good form for Lille. He has proven to a best replacement for Pepe.

@black_krptonyt: Victor Osimhen is on fire. There is no stopping this kid. Lille 1:0 Brest

@theOfficialJE: At this rate, Lille will find it difficult to keep Victor Osimhen at the end of the season. This lad is clearly destined for bigger things.