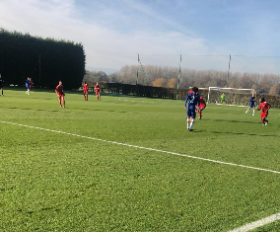 Allnigeriasoccer.com can exclusively report that Chelsea's Nigeria-eligible goalkeeper Kelechi Chibueze is attracting interest from Leicester City.
It is understood that The Foxes are in the market for a goalkeeper to bolster their youth team and have identified Chibueze as a candidate to fill the position.
However, the King Power Stadium outfit face a stumbling block in their bid to sign the Anglo-Nigerian youngster as he is one of the promising teenagers offered scholarships by Chelsea ahead of the 2020-2021 campaign.
Chibueze started this season as first choice goalkeeper for Chelsea U16s team but has recently played second fiddle to another player of Nigerian parentage, former Nigeria U17 invitee Prince Adegoke.
After dazzling for England U15 team, he was promoted to the Young Lions U16 team before the start of last season and captained the squad in a friendly against Moldova in January 2019.
The highly-rated goalkeeper was an unused substitute in U18 Premier League games against Norwich City and West Ham this year.
Defender Derrick Abu and goalkeeper Adegoke have also been offered scholarship deals by Chelsea while Golden Eaglets invitee Adrian Akande is moving on to pastures new.
Ifeanyi Emmanuel