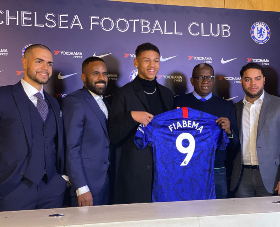 Norwegian striker of Nigerian parentage, Bryan Fiabema's transfer to English Premier League giants Chelsea is now done and dusted.
Our colleagues at Norwegian newspaper Verdens Gang is reporting that the Norway U17 international has ended his association with Eliteserien side Tromso IL after inking a three-and-a-half-year contract with Chelsea at the Cobham Training Center on Friday morning.
The agreement between The Blues and Fiabema stipulates that the center forward's contract will turn professional as soon as he celebrates his seventeenth birthday on February 16, 2020.
Chelsea were permitted to sign the Norwegian-Nigerian after their transfer ban was halved by the Court of Arbitration for Sport last month.
Fiabema will initially start with the U18, U19 and U23 teams of Chelsea as he aims to be promoted to the first team in the coming seasons.
The 16-year-old watched Chelsea's 3-0 victory over Burnley on Saturday and met with the first team players and Frank Lampard after the game at Stamford Bridge.
Ifeanyi Emmanuel
Photo Credit : vg.no/chelseafc.com