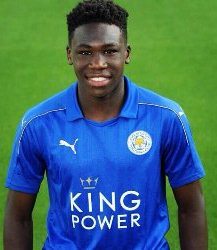 Calvin Ughelumba was impressive as the Foxes U23 side secured their 12th win in thirteen matches on Monday night, beating Brighton & Hove 1-0 in a Premier League 2 game at the Amex Elite Performance Centre.
Making his 11th start in the league, the promising left-back helped goalkeeper Viktor Johansson to post a shutout.
The winning goal was scored by Nigeria-eligible striker Josh Eppiah, his sixth of the season in all competitions and his second consecutive goal, having netted against Villarreal in the Premier League International Cup.
Despite Eppiah scoring the crucial goal that secured all three points for the visitors, Leicester City legend Sean St Ledger believes Ughelumba was the most impressive player on the pitch.
He told LCFC TV : "I think Calvin Ughelumba has been fantastic tonight, he’s been quick and strong.
"A couple of his clearances went out of play, but on the whole he’s made good decisions throughout the game and I think he’s been fantastic."
The 20-year-old Ughelumba is open to representing the Nigerian National Teams if approached by the Nigeria Football Federation.
Ifeanyi Emmanuel
Photo Credit : lcfc.com