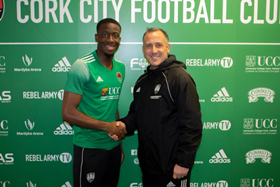 With a statement on their official website arsenal.com,  Arsenal have confirmed an exclusive report by allnigeriasocecr.com that Nigerian-born defender Joseph Olowu has joined League of Ireland Premier Division side Cork City on loan until the end of the Premier League season.
Olowu arrived in Cork on Friday, February 7 and was involved in the pre-season friendly against Longford Town the following day.
Cork City delayed the announcement of Olowu as a new player of the club because they were awaiting international clearance for the last few days.
In his first words as a Cork City player, Olowu told the club's official website : "It’s a pleasure. It was an exciting opportunity when I first heard it, and thought that it’d be good for me to further my footballing career.
"Neale explained to me the kind of football he wants to play – he wants to get it on the ground, play exciting football to get the fans on side, so that sounded good to me, to be honest.

"On a personal note, I want to get a lot of game time in, and play as much football as possible and on a team basis, I want to help this team get into good position and keep pushing on for the season."
The 20-year-old Olowu is in contention to make his professional debut for Cork City in their league opener against Shelbourne on Friday.
Ifeanyi Emmanuel
Photo Credit : corkcityfc.ie