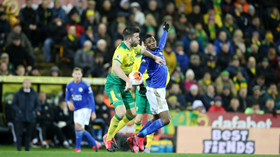 Kelechi Iheanacho's disallowed goal early in the second half was clearly the turning point in the game as Leicester City suffered a 1-0 loss to bottom club Norwich City in the Premier League on Friday night.
The Nigeria international thought he had given the Foxes the lead on 49 minutes when he found space on the edge of the box and fired a shot into the bottom corner, only for the goal to be cancelled by the video assistant referee.
Jamal Lewis' great finish on 70 minutes, his first Premier League goal, secured all three points for the Canaries.
Reacting to the handball incident, Iheanacho insisted that the ball did not land on his hand before he struck the shot and he has yet to see the replay.
The Foxes number 14 told Premier League Productions : "Obviously I was concentrating on the ball, I haven't watched the replay yet but I feel it hit his shoulder and it (the ball) didn't touch my hand.
"As I said I haven't watched the replay. If that's the rule, then that's the rule. I didn't feel it touched my hand. Obviously if that's the rule then you do nothing about it."
Leicester City have managed only one win from their last seven Premier League outings, which could damage their hopes of playing UEFA Champions League football next season.
"It would be a damage if we don't put things right, I think this is a big lesson to us coming here and losing to Norwich.
"They are a good side but they are bottom of the league so we should have won.
"We did pretty well and we'll just focus on the next game and see if we can get the points and get the win," added Iheanacho.
The return to action of Wilfred Ndidi was the only positive from today's loss to the Canaries.  The holding midfielder came on to replace Hamza Choudhury in the 67th minute.
Ifeanyi Emmanuel
Photo Credit : lcfc.com