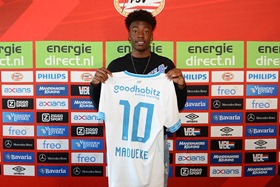 English Premier League clubs Arsenal and Wolverhampton Wanderers have suffered a blow in their pursuit of Anglo-Nigerian teenager Nonso Madueke, with the winger reaching an agreement in principle over a new multi-year contract with PSV Eindhoven.
According to Dutch football magazine Voetbal International,  Maduke is celebrating his eighteenth birthday today and is signing a new five-year deal with PSV immediately, keeping him at the club until the end of the 2024-2025 season.
The England U18 international has decided to remain at PSV for sporting reasons having been promoted to the first team even before he turned 18.
Last weekend, he made his full debut for PSV in the Eredivisie in a 1-0 win over FC Groningen after appearing as a substitute in three previous matches in the division.
Maduke turned down a scholarship offer at Tottenham Hotspur and rejected overtures from Manchester United before switching to PSV in the summer of 2018.
Valencia and RB Leipzig were also credited with an interest in Maduke before he agreed a new deal with PSV.
Igho Kingsley
Photo Credit : psv.nl