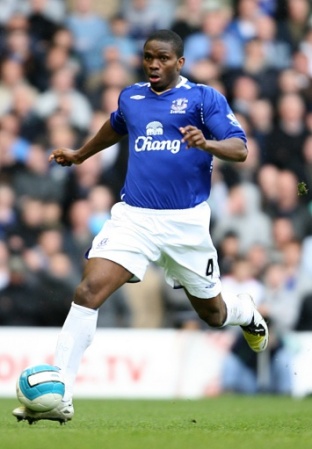 Joseph Yobo has finally revealed the true story behind signing a new five-year deal with Everton despite attracting concrete interest from Premier League giants Manchester United and Arsenal.
The former Super Eagles captain admitted that he was unsettled after the Toffees sold their most promising player Wayne Rooney to Manchester United and needed reassurances on the way the club was being run.
After starring for Nigeria at the 2002 World Cup, Yobo joined Everton initially on loan before the move was made permanent the following season.
Speaking to ESPN journalist Colin Udoh, who accidentally leaked the news of the Red Devils and the Gunners making an approach, Yobo said : "When Rooney was sold to Manchester United, that triggered me to want to leave.

"When I came to Everton we weren't a top half team but we started to win. Rooney was just coming through, he was the star of the team and they sold him and I said, 'Are we building or are we selling players', so I was like what am I doing here if Rooney is gone, maybe I need to go too.
"I actually spoke to the owners and spoke to the coach, I told them my mind. After you put out that report I was in the office till the next morning and I asked them why they are selling players. "
Yobo admitted that he had no choice but to ink a fresh multi-year contract so as to prove his loyalty to Everton.
He continued : "At that moment we decided that I was going to extend my contract because they told me what the plan was and the reason why they sold him.

"I was in a position of strength, it triggered something and I signed a new five-year contract, at that point people were talking to my agent, it's either I sign or I leave the club so I had no option and that showed my loyalty to Everton.

"Everton is a big club but there were other big clubs that spoke to me as well, it was a great decision at the end."
Nigeria's most capped outfield player in history, Yobo played 55 times for the Super Eagles while he was on the books of Everton.
Ifeanyi Emmanuel
Photo Credit : evertonfc.com
Copyright ANS