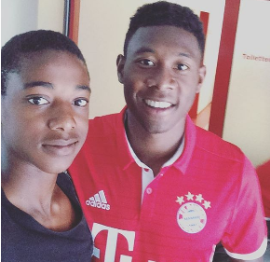 Allnigeriasoccer.com can exclusively report that Nigerian youngster Kimberly Ezekwem has ended speculation about his future by agreeing a new deal with German Bundesliga side SC Freiburg.
The promising defender would have walked away from Freiburg as a free agent on July 1, 2020 if he did not accept the proposal from the Schwarzwald-Stadion outfit.
Ezekwem has been rewarded with fresh terms following the progress he has made since he joined Freiburg in the summer of 2018 from German champions Bayern Munich.
The 18-year-old has broken into Freiburg's U19 starting lineup this season, making fifteen appearances in total in the
A-Junioren Bundesliga Süd/Südwest and has shown his creativity from his fullback position by providing two assists.
A left-back by trade, Ezekwem models his game after Bayern Munich star of Nigerian descent David Alaba, and he can also play as a central defender just as the Austria international.
Apart from the aforementioned clubs, he has played for the youth teams of SE Freising and 1860 Munich in the past.
Ifeanyi Emmanuel
Copyright ANS