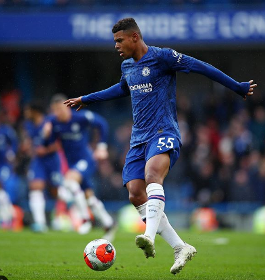 Chelsea are on the brink of confirming that Faustino Anjorin has committed his future to the club by putting pen to paper on a fresh multi-year deal.
Chelsea youth team guru Chelsea Youth has tweeted that the official confirmation of Tino Anjorin's new contract is a formality and it could be announced this week, and added that the deal is done and dusted.
The teenager's new contract will put an end to speculation surrounding his future, with the likes of Manchester City, Manchester United, Norwich City, Liverpool and Arsenal monitoring his situation.
A powerful box-to-box midfielder, Anjorin is also comfortable being deployed as a winger and played in that position when he made his Premier League debut off the bench against Everton in March 2020.
His other appearance for Chelsea's first team this season came against Grimsby Town when he made his professional debut, and he frequently trains with the first team stars.
A key player for England U19s, Anjorin is being monitored by the Nigeria Football Federation with a view to a call-up to the Super Eagles in future if he switches his international allegiance from England to Nigeria.
The Poole-born starlet officially joined Chelsea as an U9 and signed his first professional contract in November 2018.
Ifeanyi Emmanuel
Photo Credit : chelseafc.com
Copyright ANS