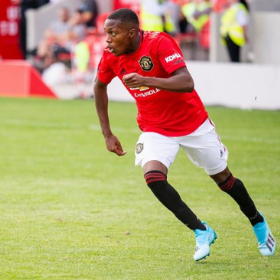 Manchester United have officially issued their retained and released list for the Academy squads ahead of the start of pre-season preparations.
Two strikers of Nigerian descent in the shape of Dillon Hoogewerf and Ayodeji Sotona were among the 202 players retained by the Old Trafford outfit.
Hoogewerf remains under a professional contract which he signed in March 2020, while Sotona will enter the second year of his scholarship as from July 1.
Signed from Ajax Amsterdam last summer, Netherlands U17 international Hoogewerf scored in every competition he played for Manchester United in the curtailed season, including the U18 Premier League, U18 Premier League Cup, FA Youth Cup and Premier League 2.
Sotona who has been touted as the fastest player at Manchester United represented the Red Devils youth teams in the U18 Premier League, U18 Premier League Cup, EFL Trophy and FA Youth Cup, and finished the season with five goals to his name.
United are expected to make a further announcement regarding the intake of first-year scholars for the Under-18s squad in 2020/21.
Allnigeriasoccer.com understands that the 2004-born striker Shola Shoretire is expected to be among the new scholars, while central defender Junior Nkwonta has been released.
Ifeanyi Emmanuel
Photo Credit : manutd.com
Copyright ANS