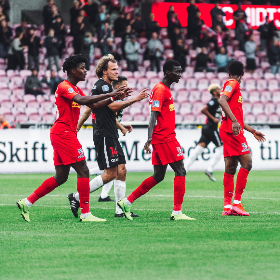 Highly-rated teenager Tochi Chukwuani netted his first professional goal for FC Nordsjælland as they suffered a 6-3 loss to Superliga champions FC Midtjylland at the MCH Arena on Friday evening, allnigeriasoccer.com reports.
The Denmark U17 captain, who is eligible to represent Nigeria through his parents, needed only eight minutes to get on the scoresheet after coming off the bench to replace Jacob Christensen.
Nigeria U23 invitee Frank Onyeka put FC Midtjylland 3-2 up with a brilliant curler from just outside the area at minute 57, only for Chukwuani to restore parity twelve minutes later.
The 17-year-old finished off a move he started near the penalty box when he placed the ball beyond the goalkeeper after making a run inside the 18-yard box.
Chukwuani was on the pitch for 231 minutes in total spread across seven matches in all competitions before netting his first senior goal.
He is the youngest player of Nigerian descent to feature in Europe's top fifteen leagues this season, aged 16 years, 5 months and 29 days when he made his Superliga debut against Aalborg.
Ifeanyi Emmanuel
Photo Credit : fcn.dk
Copyright ANS