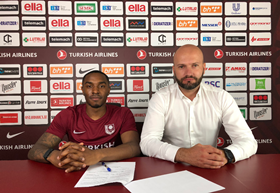 Premier League of Bosnia and Herzegovina champions, FK Sarajevo have officially announced the capture of former England youth international of Nigerian parentage Matthias Fanimo.
Allnigeriasoccer.com exclusively reported two days ago that FK Sarajevo were ahead of three other European clubs, namely TSV Hartberg (Austria), Japoel Kfar Saba (Israel) and MTK Budapest (Hungary), in the race for the signature of the 26-year-old.
A product of West Ham United's Academy, the winger blessed with explosive speed has inked a three-year contract with FK Sarajevo, ending his association with Mladost Doboj Kakanj in the process.
"I am happy and satisfied that an agreement has been reached and that I am now a member of FK Sarajevo," Fanimo told the official website of FK Sarajevo.
"This is a great club in Bosnia and Herzegovina and it is a great honor to play for it. I can't wait to play in front of Sarajevo fans."
Sports coordinator Emir Hadzic added : "I am extremely pleased that we managed to arrange the arrival of Fanim, he is a player who played in the Mladost team the previous two seasons, and is not unknown to our fans. We hope that he will continue with good games in the Bordeaux jersey."
Apart from West Ham, Fanimo turned out for English clubs Tranmere Rovers, Bishop's Stortford, Eastleigh, Margate and AFC Hornchurch before moving abroad in January 2018.
Ifeanyi Emmanuel
Photo Credit : fksarajevo.ba
Copyright ANS